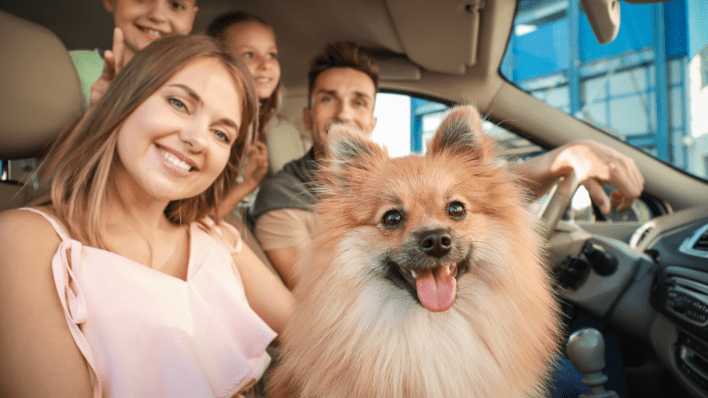 Full article with thanks to: travelnuity.com/travelling-in-the-uk-with-a-dog

Travelling Between UK Countries with a Dog

It’s quite simple to travel between most of the individual countries of the United Kingdom with a dog, including England, Wales, Scotland, the Channel Islands and the Isle of Man. There’s no need for a pet passport or rabies vaccine. It’s easy to visit multiple countries in your UK itinerary.

However, following the end of the Brexit transition, the requirements to travel with a pet to Northern Ireland from Great Britain greatly changed. Pets were meant to now have a microchip, rabies vaccine, worming treatment and pet health certificate.

However, as of September 2021 it was announced that the new requirements are not being enforced, indefinitely. It is as yet unknown whether they may be enforced in the future, or if the rules will change again. For the latest details, see the latest government information.

The situation to travel in reverse from Northern Ireland to Great Britain is still the same, with no documentation or worming treatment required.

Flying with a Dog in the United Kingdom

When travelling around the United Kingdom with a dog, flying isn’t the best option. Due to government regulations, most airlines don’t allow pets to fly in the cabin, or even as check-in baggage.

Similar rules apply when flying to or from the United Kingdom. Pets are strictly not allowed to fly in the cabin or as checked baggage on flights into the UK, only as cargo. The rules are relaxed for flights departing the UK, but most airlines still don’t facilitate pets flying in the cabin.

For more details on flying with a pet in the United Kingdom, including the pet policies of all UK airlines and which ones can fly pets as cargo, read my guide.

Catching Long-Distance Trains in the UK with a Dog

Luckily, when it comes to taking long-distance trains in the United Kingdom, the situation is much more dog-friendly than flying. If you are travelling long distances and not driving, taking a train is a better alternative to flying with your dog.

For starters, on trains in the UK, dogs are allowed and even travel for free! This applies to both small dogs (in a container) and larger dogs (that need to be on a leash). Up to two dogs can travel per passenger for free, as long as they are part of your personal allowance of three free items. Additional pets will be charged at 50% of the adult fare.

If travelling in a sleeper cabin, a fee does however apply. Additionally, if an animal is causing or is likely to cause inconvenience due to its size or behaviour, it can be removed.

For a full list of the regulations, check the National Rail website. The same rules are legislated to apply to all train companies in the UK, although fees charged can vary.

I travelled from Manchester to London with my dog on a train and found it a very comfortable and convenient option. It’s best to book as far in advance as possible to get the best prices.

Taking Ferries with a Dog in the UK

The other option for travelling with your dog in the United Kingdom is to take a ferry across the Irish Sea to Northern Ireland. While your dog would need to fly in the hold to Northern Ireland, there are multiple dog-friendly ferry options, including ones that allow foot passengers to bring dogs.

Depending on the ferry, dogs are left in your vehicle or onboard kennels are available. To find out more about the ferries available for travelling to Northern Ireland with your dog, check out my guide on taking your dog to Northern Ireland. In particular, I recommend this ferry as the most dog-friendly ferry of any of the options to the whole of Ireland.

Local Transport in the UK with a Dog

Dogs are generally allowed on public transport in the United Kingdom, although the regulations depend on the local authorities.

In London, dogs are allowed to travel on the underground and buses for free. The one caveat is that dogs may not be allowed “if there is a good reason to refuse it”. This sometimes comes up as an issue for people taking larger dogs on buses. However, smaller dogs or dogs on the underground are unlikely to be refused.

Additionally, if you are using the underground, dogs are meant to take the stairs or lift (if available), or otherwise, be carried on the moving escalators. (According to the rules, if only an escalator is available and your dog is too large to carry, they will stop it for you if it’s not “busy”… But in reality, I doubt this often happens.)

Dogs are required to be on a leash, or alternatively in a container for smaller pets. Click here for the full Transport for London regulations.

Outside of London, the rules for taking dogs on buses and other local transport differ between companies. Some companies allow dogs, sometimes for free, while other companies don’t allow pet dogs.

For instance, when I was in Manchester in 2018, our small dog was allowed on the bus for free (although we okayed it with the driver), while dogs aren’t allowed on the trams in Manchester. Check the individual company regulations, or be prepared for a possible refusal.

Dining Out in the United Kingdom with a Dog

While it’s not as common for restaurants and cafes in the UK to allow dogs inside as in Germany and Italy, there are a small and increasing number of dog-friendly establishments. To discover some excellent options, search for online listings or ask for your accommodation.

One of the most likely dog-friendly options is the ubiquitous pubs in the UK. As well as being a bastion of Sunday lunches, most pubs allow dogs in at least part of them, whether it’s in the city or the countryside. It just may mean eating in the more simple bar area, rather than the formal dining room.

Given the weather in the UK isn’t that reliable, it’s certainly a relief to find somewhere to hang out on a cold, wet evening, indoors with your dog at your side. Just always ask first, as there are some pubs that don’t allow dogs.

Dog-Friendly Accommodation in the United Kingdom

The United Kingdom offers a diverse range of dog-friendly accommodations. There’s everything from upmarket hotels, complete with special pet services, to homely country pubs and cottages.

Many Airbnbs in the UK will also allow dogs, although I often found that they pointedly request that dogs are not left in the properties by themselves. Follow my tips for finding and staying in a pet-friendly Airbnb.

If you’re staying in London, check out my list of the best dog-friendly hotels in London, ranging from the luxurious through to the affordable. Affordable chain hotels in the UK that allow dogs include most Ibis and Travelodge hotels, as well as many Best Westerns and Holiday Inns.

Dog-Friendly Sightseeing in the United Kingdom

There are quite a few attractions in the UK that allow your well-behaved dog to accompany you, mainly those located outdoors.

I also found it quite handy that many attractions have clear details on their website about whether they allow dogs, and what rules apply. If dogs aren’t allowed inside, some places even note what facilities they have for dogs to be left outside.

If holidaying with a dog in the UK, it’s best to head to the countryside for the most dog-friendly options. When I visited the Lake District, in the north of England, it seemed that every second visitor was accompanied by their dog! Other popular outdoorsy areas in the UK that are great to visit with a dog include Cornwall, Wales and the highlands of Scotland.

Full article with thanks to: travelnuity.com/travelling-in-the-uk-with-a-dog

We offer free advice on pet travel within or outside the UK, so whether you’re looking for worldwide pet travel services or European travel – we give you our honest, expert advice.

If you choose us for pet travel, don’t worry – your animal companion will be in safe hands from start to finish.

Simply get a quote from us for more information.